Dental MythBusters: Do Dentists Have a High Suicide Rate? 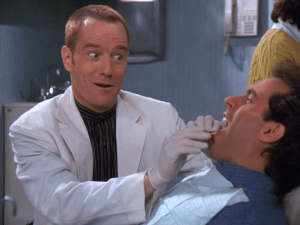 In one of my favorite Seinfeld episodes, Jerry’s Jewish dentist Tim Whatley (played by Bryan Cranston) declares “You have no idea what my people have been through!”

“No, the dentists” replies Tim. “You know we have the highest suicide rate of any profession.”

Seinfeld then quips “Is that why it’s so hard to get an appointment?”

Is this merely a joke or is there some truth to dentists having a high suicide rate?  Earlier this week a patient asked me about this dental suicide statistic about which everyone seems to have heard something, but nobody actually knows anything.  I’ve been aware of this perception long before the day I declared my interest in going to dental school, but I’ve never been interested enough to actually research the issue seriously.  I always suspected that there was some statistical anomaly, sample size issue, inside joke, or other reason to account for the data, but I had to confess that I really didn’t know.

Each “I don’t know” answer I have to give my patients spurs me to research and look for answers though, so here’s what I found:

Articles with headlines like ‘Professions with the Highest Suicide Rate’ have been appearing since at least the 1960s in dental journals.  As I skimmed through the data available to me, the results aren’t as crystal clear as the pop culture perception indicates.  These are the most significant studies that show dentists are more prone to suicide:

Not all studies agree with this data, however.  Among other studies, the following refute the conclusions outlined above:

Right from the start I noticed that there is disparity between what the American Dental Association says and what outside groups report.  No other group gathers more data from, and knows more about dentists than the ADA, but at the same time, could there be a little bias involved to promote the profession?  I’m not sure of the answer, but given the ADA’s research-based position on everything else I’ve ever seen, including their honesty in matters that show dentists in an unfavorable light, I tend to trust them.

It should also be noted that suicide statistics are also notoriously hard to compile.  Not all states report death data the same and suicides go unreported more often than not, so the actual numbers are likely to be much higher than we think they are for all professions.  Additionally, suicide mortality statistics do not include unsuccessful attempts (e.g. “attempted suicide” for the purpose of gaining attention, etc.) which makes the data even harder to interpret.  Do dentists have a higher suicide rate?  The data seem to indicate so to me, but to this point, I’m not confident in the means which lead to this conclusion.

One thing I don’t buy is that some within the profession perceive dentistry to be more stressful than other occupations and, like fictional Tim Whatley, they cite the suicide statistic as evidence of this.  Yes, managing a small business can be stressful and the financial requirement to go to school, buy a practice, and keep a practice running is daunting.  The intense perfectionist attitude required to fix teeth properly can become a stress-inducing permanent mindset, and if permitted, work can easily overflow and put strain on family, church and other facets of a dentist’s life.  That being said, the most stress I’ve ever felt in my life was at BYU where I did school full-time, work part-time, and tried to keep some semblance of a social life going at the same time—just like everyone else!  Don’t believe that dentists are under any kind of extraordinary stress.  Stress comes to everyone through life, jobs, family, and a variety of other factors.  I sincerely don’t believe dentistry to be any more stress-inducing than most other occupations, and in fact, I find it to be extremely rewarding and worth every bit of effort I put into it.

On the other hand there’s a dark side of this stuff that I haven’t yet addressed:  depression.  I cannot downplay the increasing evidence that many people struggle with depression, severe anxiety, and a myriad of other psychological conditions that might lead one to suicidal thoughts.  I’ve never felt crippling depression once in my life, but I have friends who do struggle with it; it’s a very real thing.  Are there more depressed dentists per capita than other occupations?  Does dentistry somehow attract more individuals that are predisposed to such things?  These are questions that won’t be answered for a while.