The Redcoats (and Gingivitis) are Coming! 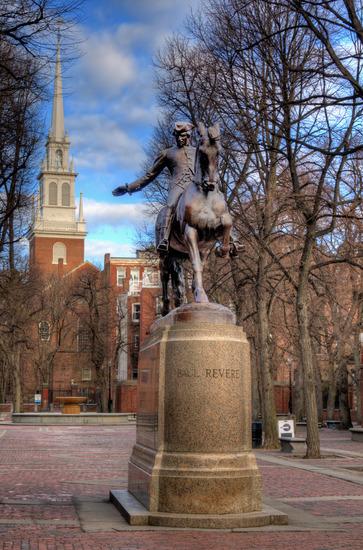 As I see it, one of a dentist’s principal duties is to be a voice of warning for things like gum disease and cavities. If that is true, then it makes perfect sense that Paul Revere, history’s all-time best warning voice, was a dentist.

Paul Revere was born on New Year’s Day in 1735 as the eldest of seven children to French immigrant Apollos Rivoire, who later anglicized his name, and Boston-native Deborah Hichborn. After many years of apprenticeship under a goldsmith in Boston, Apollos opened up his own shop and brought his son Paul on to apprentice under him. When Paul was 19, tragedy struck the family and his father died. Paul was left to carry on the family business and take care of his mother and siblings. Paul soon married as well and had eight children with Sarah Orne. When Sarah died unexpectedly, Paul married Rachel Walker and they added another eight children to the Revere family. Needless to say, Paul had a lot of people depending on him financially and even though his business did well, he had to supplement his income with side jobs, most notably illustrating, engraving, and dentistry.

Sometime in the 1760s English oral surgeon John Baker arrived in the colonies. Paul began studying under Baker, who taught him how to create false teeth. Although Paul’s primary income was still working with metals, his skills in dentistry grew and his dentist side job was successful. In a 1770 Boston Gazette ad, Paul boasted that he could repair teeth “as well as any surgeon dentist who ever came from London” and that “He fixes them in such a manner that they are not only an ornament but of real use in speaking and eating.” Urban legends exist that Paul Revere fabricated a couple sets of dentures for George Washington, but I can’t find anything credible to confirm these rumors, so I assume they are false. Even though Paul Revere was only a dentist on the side, he seems to have been pretty good at it. All of my sources indicate that Paul Revere was a man with amazing artistic skill who probably would have excelled at anything requiring hand-eye coordination.

As a family man and business man, Paul Revere had a pretty busy life, but somehow he also found time to be heavily involved in political and community efforts as well. Like most Bostonians, he felt squeezed by British tax policies and as he saw friends and neighbors struggling around him, he felt his own security would also be negatively affected. Paul joined the Freemasons and rubbed shoulders with political activists and notable patriots like Joseph Warren and James Otis. Revere took on responsibilities of spying on the British soldiers and acting as courier for the Boston Committee of Correspondence, which became a main line of communication for revolutionary efforts. If anyone doubted that Revere had guts and commitment to the revolutionary movement, this was all put to rest when he and others dressed as Indians and dumped tea into the Boston harbor, a bold and outright act of defiance known as the Boston Tea Party.

It wasn’t until April 18, 1775 that Revere gained legendary status. In February of that year, the British government had declared Boston to be in a state of rebellion and intended to carry out a secret mission to destroy rebel military supplies which were stored at Concord. Patriot spies learned of their plans weeks before and moved the supplies to secure locations. When British ships moving large numbers of troops were spotted on April 18, Joseph Warren worried they would go after patriot leaders in Lexington on their way to looking for the military supplies. Fearing for the safety of leaders Samuel Adams and John Hancock, Warren sent out riders Paul Revere and William Dawes to warn them. Before departing, Paul Revere had Boston patriots hang lanterns in the Old North Church to signal militiamen across the river about the movements of the British army and then left to carry the same message to Adams and Hancock himself. Revere, Dawes, and other riders would also inform patriot households along the way, thus triggering a network of several messengers which would spread word around the countryside that night of the coming British force.  As a result of the “midnight ride,” patriot militias were able to organize. When shots were fired at daybreak in Lexington, the patriot militias were ready for battle and thus began the American Revolutionary War. It should be noted that Paul Revere has attained an unfair historical distinction over his peers in this ordeal. He is certainly deserving of great honor, but so are many others who are all but forgotten by Americans today. Henry Wadsworth Longfellow’s poem “Paul Revere’s Midnight Ride” is probably to blame for this because it gives Revere sole credit for pretty much everything that happened that night, in addition to perpetuating several other inaccuracies. In reality, many men, including Joseph Warren, William Dawes, and several others whose names history has forgotten should receive credit as equal participants with Paul Revere.*

During the war, Paul Revere served in many capacities. He produced gunpowder and cannons for the Continental Army, served as a commander in a Boston military stronghold, and printed the country’s first money. In 1776, after rebel soldiers took control of the Bunker Hill area, a mass grave of patriot soldiers was uncovered and attempts to identify the fallen soldiers were made so proper burials could be performed. Revere used his dental knowledge to identify the remains of his friend Joseph Warren; he recognized a prosthetic that he had personally fabricated to replace two of Warren’s missing teeth. According to the National Museum of Health and Medicine, this was the first instance in our country where forensic dentistry was employed to identify a fallen serviceman.

After the war, Revere opened the country’s first copper mill, as well as a foundry and a hardware store. On May 10, 1818 he died of natural causes at the old age of 83. From everything I have learned about Paul Revere, he was a true patriot, a good man, and a figure worthy of our respect and honor. Although he was only in the profession on a part-time, side job basis, I’m proud to place him on my list of the coolest dentists ever.

*On the other hand, Revere was the first rider to reach Adams and Hancock to deliver the warning message. Historians believe he had a shorter route and a faster horse than Dawes. For historical purposes, Ricky Bobby was right: “if you ain’t first, you’re last.”